For many years LU has been defending its brands, and in particular the famous chocolate coated sticks, the Mikado. LU thus monitors imitations, but also trademark registrations made by its competitors. However, the results are not always favourable to the Mondelez Group, owner of the Mikado brands. A look back at several strong chocolate businesses.

Mikado celebrates its 35th birthday this year. It was in 1983 that the Japanese group Glico, which markets the Pocky in Japan, decided to establish itself in Europe. To adapt its products to the European market, Glico forms an alliance with LU. The success of the chocolate coated stick is immediate. LU has invested heavily in this product, and has innovated by diversifying its offer. The milk chocolate stick has become the favourite of the French. 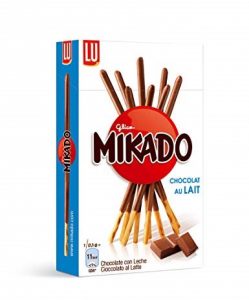 Today, more than 3 billion Mikado are made every year in France. The success of the chocolate sticks is such that the Danone group had no difficulty in finding a buyer in 2012. Indeed, wishing to sell its biscuits branch, Danone sold Mikado to the American group Mondelez-Kraft Foods.

It is interesting to note that the buyer defends the Mikado brand as much as the former owner.

In 2006, a hard-discount supermarket chain, Le Mutant, marketed an imitation of Mikado. The practice is well known, and is generally settled amicably between manufacturers and distributors. But LU, no doubt wishing to set an example and deter other infringements, took Le Mutant to court.

LU claimed the existence of a three-dimensional mark (which, unlike the patent, offers protection without a time limit) on the chocolate stick. This brandThe contract, which concerned a chocolate-covered stick-shaped biscuit with the exception of one of its ends, was to guarantee LU exclusivity. This was recognized by the Strasbourg Regional Court in November 2006, which ruled in LU's favour and condemned Le Mutant for trademark infringement.

As a result of this decision, Mikado has enjoyed greater protection than other biscuits that do not have such a distinctive shape. For more than 10 years, the Mondelez Group has benefited from the impact of this favourable decision. But in 2018, the situation turned around: the Paris Court of Appeal refused to convict another competitor.

The limits of protection: Mikado does not have a monopoly on the chocolate stick

Mondelez believes that these biscuits are an imitation of Mikado sticks and is asking for the invalidity of the ChocOlé brands. The defendant counterclaims that the Mikado marks are invalid on the ground of lack of distinctiveness. According to the defendant, the chocolate topping of the biscuit is exclusively functional 'since it makes it possible to avoid getting one's hands dirty when handling the biscuit. »

On 20 October 2016, the Paris Court of First Instance rejected the arguments of both parties. Mondelez therefore appealed against the judgment. March 9, 2018The Paris Court of Appeal found that the shape of the Mikado was arbitrary on the day of filing, and therefore distinctive. The judges state that the usual shapes of biscuits are generally circular, square or rectangular.

The Mikado, with its distinctive shape, fulfils its function as a brand..

On the other hand, the Court does not recognize infringement or parasitism. According to the Court, confusion between the marks is not proven. The two marks would have different presentations: the LU sticks would evoke the game of Mikado, whereas the ChocOlé biscuits packages present biscuits twisted in pairs in a twisting movement marked by a spiral. Similarly, ChocOlé packs open in the middle, presenting the biscuits like pencils in a box, whereas Mikado has opted for a "cigarette pack" type opening.

The Court of Appeal justified its decision by citing several differences between cookies. But this ruling signals the end of Mikado's monopoly, which will have to accept the marketing of similar competing products.

To prevent your marks from becoming "the little weakness that will lose you", you can consult our brand guide.