Haribo, Lindt, Nestlé or the overdose of brands among confectioners.

Haribo, Lindt, Nestlé or the overdose of brands among confectioners.

We have often been told: sugar abuse is bad for your health. And yet, confectionery continues to sell, supported by gourmet advertisements. While candy and cookie manufacturers invest heavily in advertising, they also remember to protect their products. Trademark law allows them to defend themselves against imitations and counterfeits. But there are many conflicts between confectioners, especially over the question of the distinctiveness of trademarks. Indeed, can one so easily appropriate a form?

The misappropriation of industrial property by confectioners

Compared to other industrial property rights, the trademark has an enormous advantage: it has no time limitation. By being used and renewed, it enjoys unlimited protection.

Conversely, designs offer an exclusivity limited to 25 years. Similarly, an invention covered by a patent will only be protected for 20 years. As a result, many applicants circumvent these time limitations by filing trademarks when other intellectual property rights are more suited to their products. This is the case of Glico, which has opted for a trademark registration to protect the Mikado stickThe model - which protects 3D shapes - was more appropriate. Many confectioners have chosen this way to protect their creations.

However, if such misappropriations are provided for by law (the shape or packaging of a product may constitute trademarks), judges are becoming increasingly demanding with applicants. Indeed, it is necessary to avoid conferring overly broad monopolies, which would hinder free competition.

The chocolate bunny is not distinctive.

The Lindt case is well known to trademark lawyers. Indeed, the confectioner had applied for a trademark to protect the shape of the chocolate rabbit, which was in theory allowed under European law. But the European Intellectual Property Office refused to register the trademark: the examiner did not consider the "Golden Rabbit" to be distinctive. 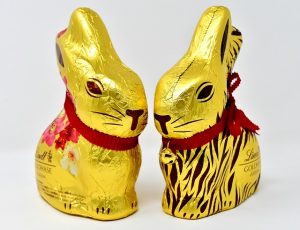 It was in 2012, after a 12-year dispute, that the European judges finally decided. For them, the simple fact of affixing a red ribbon to a chocolate bunny does not make it distinctive.

Lindt's German competitor, Riegelein, therefore has the right to market a chocolate bunny wrapped in gold paper, without there being any infringement.

Haribo v. Lindt: The War of the Bears

The Haribo gelatin teddy bears ("Golden Bear" or "Goldbären" in German) have been protected by a word mark since 1967 in Germany. These little sweets are extremely popular across the Rhine, where they are the confectioner's flagship brand. 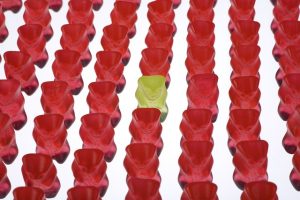 That's why, when Lindt brings a teddy bear wrapped in gold paper to market in 2010, Haribo sees red. The confectioner sued the chocolate maker, citing the notoriety of his Goldbären brand. As the products are very different (chocolate vs. candy), the judges make a wide variety of decisions. For some, there is a risk of confusion. For others, the Goldbären mark has a generic character.

In 2015, the German Federal Court (the highest court in the country) ruled in favour of the chocolate maker. It states: "The sale by Lindt of chocolate figurines in the shape of a bear wrapped in gold paper with a red ribbon does not represent an infringement of the Haribo brand 'The Golden Bear' or an illegal imitation of the jelly products. »

In 2018, the confectioner's war still continues. Since 2002, Nestlé has been fighting to register the following European trademarke : 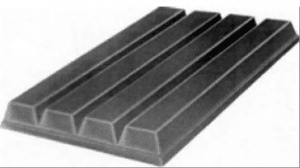 The question of the distinctiveness of the trademark is at the heart of the debate. All the more so as Mondelez markets competing biscuits, which have the same shape as Leo de Milka.

According to the judges, the Kit Kat mark consists of "a form of excessive simplicity and of which no distinctive element enabled consumers of the goods in question to distinguish their commercial origin". It therefore has no distinctive character. Nestlé has not yet given up. The Swiss chocolate maker is trying to assert a distinctiveness acquired through use.

Judges are more and more demanding with confectioners. They have to fight for their brands. To avoid indigestion, leave out chocolates and other sweets, and read again. our article on the apple brand !