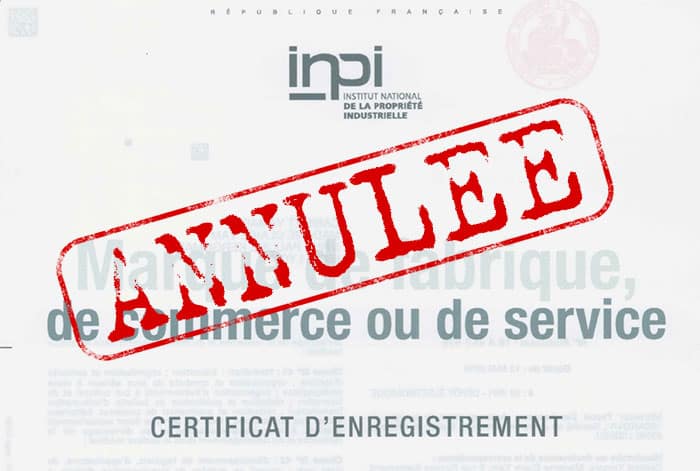 Cancellation of a trademark: invalidity proceedings before the INPI

Until March 2020, the only way to obtain the cancellation of an earlier French trademark was through the courts. Like any legal action, this was a long and costly procedure, often reserved for large companies with sufficient means.

With the entry into force of the Covenant ActIt is now possible to file trademark invalidity applications directly with the INPI. This is a fast and inexpensive administrative procedure that should make it possible to free up registers of earlier trademarks that have not been exploited or do not comply with legal requirements.

The purpose of the cancellation actions

When the trademark is filed, an initial check is carried out by the INPI (which will not, however, check availability). However, trademarks are sometimes registered even though they do not meet all these essential requirements.

In this case, the trademark runs the risk of being cancelled. Invalidity action must be based either on an absolute ground (misleading trademark, trademark registered in bad faith, trademark contrary to public policy) or on a relative ground (infringement of one or more prior rights).

Who can act in nullity?

If the application for a declaration of invalidity is based on absolute grounds, it may be filed by any natural or legal person. It is not necessary to demonstrate an interest in the proceedings. However, if the application is based on a prior right, it must be filed by the holder of the right concerned. The latter will have to prove the existence of his prior right.

As this is an administrative procedure, there is no obligation to be represented (except in special cases). However, in view of the complexity and legal technicality of the annulment proceedings, it is strongly recommended to use an professional representative.

When to bring an application for annulment?

This procedure applies to all French (or international) trademarks having effect in France. A similar procedure exists before the EUIPO for European brands.

However, the action may be blocked because of the acquiescence of the holder of the prior right invoked. This means that if the plaintiff of the invalidity action has tolerated for 5 consecutive years a later trademark of which he was aware, he can no longer apply for invalidity. Burden on the party whose mark is subject to the invalidity proceedings to demonstrate that the opponent was aware of his mark (e.g. through old correspondence between them, for example, concerning the mark).

The course of the invalidity proceedings before the INPI

This is an exclusively electronic procedure: the request for cancellation must be filed on the INPI e-procedures portal. The applicant must pay a fee of €600.

This procedure is organized in 3 phases:

The invalidity procedure is a written and contradictory procedure: the parties are invited by the INPI to confront their arguments. The owner of the contested trademark may then invoke defences. At the end of the investigation phase, the parties may, if they wish, present oral observations.

In all, the procedure lasts between 5 months and 1 year, depending on the number of exchanges between the parties. No extension of time limits is possible, but the procedure may be suspended.

INPI decisions are entered in the National Register of Trademarks and published in the Official Bulletin of Industrial Property (BOPI). They will also be accessible online, in the "Jurisprudences" database on the INPI website.

These decisions have the effect of a judgment and are enforceable.

Nullity has retroactive and absolute effect. This means that the mark is deemed never to have existed.

As with all INPI decisions, however, it is possible to appeal to a Court of Appeal.